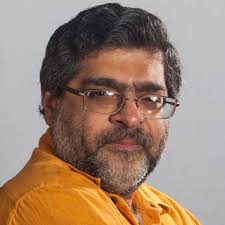 Ph.D. with Distinction, Department of South Asian Languages and Civilizations, University of Chicago, 1992

Vinay Lal was born in Delhi and raised in India, Indonesia, Japan, and the United States.

He studied literature, history, and philosophy as an undergraduate, and earned his B.A. from the Humanities Center at Johns Hopkins University in 1982. He received a M.A. from the same institution, also in 1982, for a thesis on Emerson and Indian Philosophy. He then studied film in Australia and India on a Thomas J. Watson Fellowship before commencing his graduate studies at the Department of South Asian Languages and Civilizations at the University of Chicago, where he was awarded his Ph.D. with Distinction in 1992. His dissertation, “Committees of Inquiry and Discourses of ‘Law and Order’ in Twentieth-Century British India”, received the Marc Galler Award for the best dissertation in the Division of the Humanities at the University of Chicago. He was a William R. Kenan Fellow, Society of Fellows in the Humanities, and Lecturer in History, at Columbia University in 1992-93.

Vinay joined the history faculty at UCLA in Fall 1993, and has since held several fellowships, including a Senior Fellowship from the American Institute of Indian Studies, a National Endowment for the Humanities Fellowship for University Teachers, and a fellowship from the Society for the Promotion of Science/Japan Area Studies Center at the National Museum of Ethnology, Osaka. He was elected a Fellow of the World Academy of Art and Science in February 2000.

Vinay teaches a broad range of courses in Indian history, comparative colonial histories, subaltern history and Indian historiography, as well as graduate level seminars on the contemporary politics of knowledge, postcolonial theory, and the politics of culture. He has designed and taught a cycle of upper-division undergraduate lecture courses on British India, Contemporary South Asia, the Indian Diaspora, and the Moral and Political Thought of Mohandas Gandhi. Seminars in Indian history cover such subjects as the Politics of Religion and Ethnicity in South Asia; Hindu-Muslim Encounters in South Asia; “The Woman Question” in Colonial India; The Life of Krishna in Indian Art, History, and Culture; History and the Novel; the Partition of India; Violence in Contemporary Indian Society; and History and Popular Cinema.  His lecture courses in Indian history are now available in their entirety on YouTube, a link to which can be found below.

Vinay has written regularly on a wide variety of subjects for periodicals in the US, India, and Britain. Among other subjects, he has written on various aspects of the political and legal history of colonial India, sexuality in modern India, the popular Hindi film, the Indian diaspora, Indian documentaries, the politics and history of history, dissent in the Gandhian mode, contemporary American politics, the politics of culture, genocide, and the global politics of knowledge systems. His fifteen books reflect a similarly broad range of intellectual, political and research interests. His articles, reviews, commentaries, and op-pieces have appeared in over 150 publications. At present, he is a frequent contributor to The Indian Express and the Economic and Political Weekly (Mumbai).

Vinay was formally associated as a Visiting Fellow in the summers of 1993 and 1994 with the Centre for the Study of Developing Societies and the Delhi-based Committee for Cultural Choices and Global Futures. In more recent years, he has been associated since its inception with Multiversity, a group of scholars, intellectuals and activists that meets every other year in Penang, Malaysia, with the objective of engaging in a radical decolonization of the knowledge systems of the Western academy. He is also a founding member of the Backwaters Collective on Metaphysics and Politics (2010-present), which meets annually in Kerala. He shares the sentiments of the scholars, public intellectuals, and activists who are engaged in all these enterprises, which may be described as motivated by “an intellectual concern for the ecology of plural knowledge, a normative concern with cultural survival, and a potential concern with the search for humane futures for the victims of history.”

Between 2007 and 2012, Vinay divided his time between Delhi and Los Angeles. He served as University of California’s Director of the Education Abroad Program in India for 18 months, and while on leave from UCLA in 2010-11 he served as Professor of History at the University of Delhi.