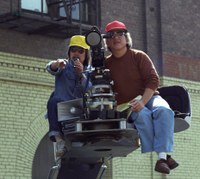 Professor Robert A. Nakamura, a pioneering filmmaker and influential teacher and mentor, “the Godfather of Asian American media” has been a major force in the conception and growth of community media since 1970. Nakamura left a successful career in photojournalism and advertising photography to become one of the first to explore, interpret and present the experiences of Japanese Americans in film. His ground-breaking personal documentary Manzanar (1972) revisited painful childhood memories of incarceration in an American concentration camp during World War II, and it has been selected for major retrospectives on the documentary form at the San Francisco Museum of Art and the Film Forum, Museum of Contemporary Art in Los Angeles.